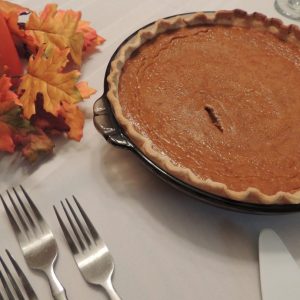 I’m a tradition girl, which means when it comes to Thanksgiving, I love new and different additions, but there are staples I can’t be without. Pumpkin pie is one of them! But forgoing the bloat, fatigue, and post-meal crash is super important and absolutely do-able. Can you imagine Thanksgiving dinner without a 2-hour nap? It’s a thing! Because it’s not the turkey that makes you so sleepy, as we’ve all been told, it’s the sugar. Easy fix! I made some mild modifications to the original recipe by Able James. Get the original here.

Preheat the oven to 425℉. Grease a pie pan with butter or coconut oil

In a large bowl, whisk together the coconut flour, almond flour, flaxseed meal, and salt.

Press the dough into the greased pie pan and freeze the pie shell while you make the filling.

In a blender, blend the pumpkin puree, stevia, dates, milk, coconut oil, cinnamon, ginger, cloves, nutmeg, and salt until the dates are broken up and well-incorporated.

Add the egg and egg yolks and blend until combined. Taste (if you’re ok with a bit of raw egg), and add a bit more stevia, ginger, nutmeg, or salt, to taste.

Pour the filling into the pie shell, and line the rim of the pie pan with foil to cover the crust edges (so they don’t burn). Bake for 15 minutes.

Reduce the oven temperature to 350℉. Bake until a knife inserted near the center comes out clean, about 50 minutes.

Remove from the oven and cool 2 hours. Serve immediately, or cover and refrigerate until ready to serve. 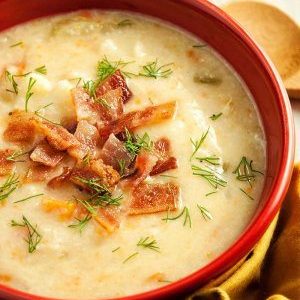 Have you ever had a craving for a creamy soup but didn’t want the cream? Well here you go! This recipe is both hearty and creamy with flavor exploding from all sides! Makes a great snack or pairs nicely with a main dish; think pastured porkchops or even beef stew! Yuuuup, I just recommended 2 soups in one meal! Livin’ on the edge!

Credit goes to Paleoleap. I just made a couple of minor adjustments.

Melt some butter in a large saucepan placed over a medium heat.

Stir in the cauliflower and cook, stirring occasionally, for about 5 minutes.

Add in the chicken stock, cumin, turmeric, coriander, and coconut milk, and stir together.

Bring to a boil; then reduce the heat and let simmer for about 15 minutes or until the vegetables are tender.

Season to taste and serve garnished with bacon and fresh dill to taste. 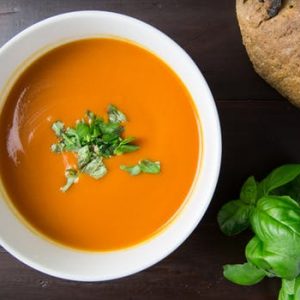 Butternut Squash, Sweet potatoes and pumpkin just scream FALL! I love love love soup when the weather begins to cool down. I’m in Louisiana, so cool to us is around 65. That’s when we bust out our pocket warmers, mittens and hoodies. And soup. This soup is sooooo easy to freeze! It always makes more than we can eat immediately so we can enjoy it all week, or freeze and eat over the course of a month or two here and there!

In a large soup pot, warm oil over medium heat.

Cook butternut squash by cutting lengthwise and putting flesh side up in a pan. Bake at 400 for 50-60 minutes. Scoop out seeds (save and roast!) and spoon out squash.

Add squash and cook for 10 minutes, until squash is barely soft.

Bring to a boil and simmer for 10 minutes.

In high-powered blender, puree in small batches on low, working up to high speed until mixture is smooth.

Serve or store in freezer in mason jars (allow room at the top for expansion). 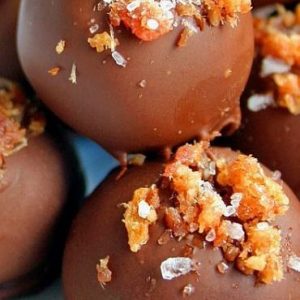 I had the honor of hosting a REFIT® training event in February and I decided to provide some snacks that would keep everyone feeling energized throughout the day. I’ve never cooked for 75 people before, but it was a ton of fun to make and then get to hear how good everything tasted (breathes sigh of relief)! And these were the Belle of the Ball, so to speak!

Of course, I have to caveat this by saying that even snacks that aren’t processed and loaded in gluten and sugar cannot be indulged in too often or too much at a time. Even the healthiest desserts will create an unwanted gain, so the key is to enjoy a moderate amount occasionally, not daily. Ok, with that aside, let’s get to the good stuff!

The only variation I made to this recipe is changing the nut butter to almond butter, but original credit goes to realhealthyrecipes.

Preheat the oven to 400 degrees F. Line a rimmed baking sheet with foil and place a metal cooling rack on it.

Brush the bacon strips with 1 Tablespoon of maple syrup and arrange on the wire rack on the prepared pan. Bake for 8-12 minutes, until crispy and caramelized.

Mince the bacon once it has cooled. Set aside a Tablespoon of the minced bacon to use as garnish.

In a large mixing bowl, using an electric mixer, cream the almond butter and coconut palm sugar until light and fluffy. Add the coconut cream and beat until fully combined. Add the coconut flour and salt, mixing on low until combined. Stir in the bacon.

Line a baking sheet with parchment paper. Scoop up 40 small round balls of the dough and place them on the prepared baking sheet. Place in the freezer as you prepare the chocolate.

Melt the chocolate chips and coconut oil in a double boiler. Dip the almond butter balls in the chocolate one by one, removing excess chocolate before setting the truffles back down on the parchment paper. Immediately garnish each truffle with a pinch of minced candied bacon before moving on to dip the next truffle.

Once all of the truffles are complete, chill for at least 10 minutes before serving. Keep in an airtight container in the fridge for a week or in the freezer for up to a month. Enjoy! 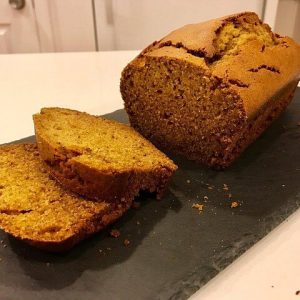 I think Fall is the perfect time for banana bread. But then again, so is Winter, Spring, and Summer…sooooo. This is one of my favorite things to cook for company, especially to pair with coffee when I’m just craving some girl time with my besties! It’s been made many times over by my clients with great success so don’t let all the ingredients fool you, it’s pretty much foolproof!

Recipe has been adapted by Peanutbutterrunner.  So good, not many changes were necessary!

Preheat oven to 350 degrees and prepare a 9 x 5 loaf pan by either oiling the dish or lining with parchment paper. (I’m a big fan of the parchment paper for easy removal from pan and easy clean up.)

Add wet ingredients to the dry and gently mix together until combined. Do not overmix.

Pour batter in prepared pan and bake for 45-55 minutes or until set in the center and a toothpick comes out clean. Let cool in pan for about 15-20 minutes before removing to a wire rack to cool completely. 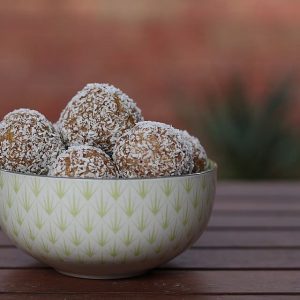 Kid friendly is always a huge plus and this makes an incredible grab and go for kids and grownups, alike! It’s wonderful as a pre or post workout snack and is easy to transport to work or take with you if you’ll be out a while. I do like to keep them cold so be sure and pack an ice pack if you’re taking them on the go! The options for toppings are endless so make it your own!

Add a bit of water if too crumbly.

If forming into balls, roll in optional toppings, If making into bars, press into dish, sprinkle with toppings, refrigerate to set, then cut into bars and wrap individually for convenience!

Refrigerate up to 5 days.

Click HERE for my favorite protein powder and put in code Lisa Lou for 10% off! 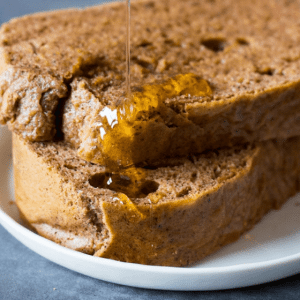 It truly doesn’t get ANY simpler than this! Have it with butter, have it as sandwich bread, make it into French toast (just a little grassfed butter to sauté in and to top with and you’ll neve miss the syrup!), or top with a bit of honey, there are lots of ways to enjoy this bread!

This recipe comes from naturallysavvy and needs no additions or tweaks! It’s darn near perfect!

Whisk the almond butter and eggs together until blended smoothly.

Whisk in the salt and baking soda.

Pour the batter into the prepared loaf pan and bake for 30 minutes. The bread is done when it easily bounces back and doesn’t sink or a toothpick comes out clean.

Remove from the oven and cool.

Cut into slices and freeze portions for future use or store in the fridge. 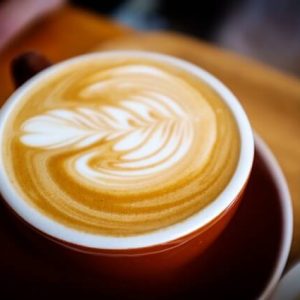 So I’m one of those girls who can actually enjoy pumpkin any time of year, so this little goodie has me all, “Well, HELLO there!!!” There’s just nothing that brings in the fall season like pumpkin recipes, the smell of cinnamon, nutmeg, allspice and cloves! This sugar-free pumpkin spiced latte recipe has all that AND the smell of fresh-brewed coffee! Yes, please!

Place in blender for about 15 seconds and indulge! 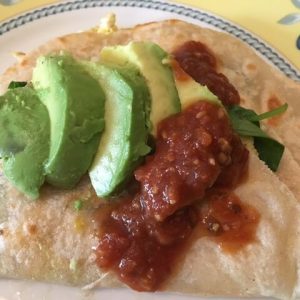 There are so many variations you can concoct out of these tortillas! In grad school, I ate at El Chico’s All. The. Time. My all time favorite was their spinach and mushroom quesadillas with guacamole. Lots of guacamole. Little did I know, since I had yet to be diagnosed with Hashimoto’s, that an autoimmunity was not letting me “get away” with eating those flour tortillas. All the symptoms of fatigue, joint pain, and brain fog were only getting worse with each poor food choice I made. But hey, I was young, a college cheerleader, super active…it was just par for the course, right? Wrong!

Today, I’m in the know and better able to manage my symptoms through far better choices. Like this one! Of course, I can re-create my old El Chico’s favorite, but my go to these days is eggs, spinach, avocado and salsa!! Ole!

Scramble eggs and add in 1 cup spinach to wilt.

In another pan, melt a bit of butter, put on tortillas, add egg and spinach, and cheese if and fold in half. Cook about 1-2 minutes. Flip and cook another minute or so.

Top with avocado and salsa! 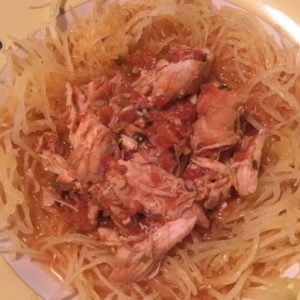 Want a fabulous dish that isn’t ingredient heavy? This is it! You’ll get a big nutritional bang for your buck with this meal. All you have to do is cook and shred your chicken and cook your spaghetti squash. I like to do my chicken in an instant pot but you can do it in a crock pot, or even bake it and then shred it if short on time.

Cook chicken, 3 options: Bake at 350 for 30-40 minutes then shred. Or if cooking in an instant pot or crock pot, put in chicken, stock, and salsa and cook until tender, then shred.

Cut spaghetti squash in half lengthwise. Salt flesh and cook facedown in a bit of oil for 35-45 minutes. Take out seeds and scrape flesh into bowls.

Pour the chicken, salsa, and stock over squash noodles.

If baking chicken instead of using an instant pot or crock pot, add salsa, stock, and shredded chicken to a pot and heat thoroughly, then pour over spaghetti squash.